I was thrilled to have counted twenty-two salamander egg masses in May In one section of the vernal pool that borders my property.  This is one of the pools nearly destroyed by the construction of a snowmobile trail.  In early June I collected one of those egg masses with the hope of being able to photograph the development of the larvae.

I have relied on the internet to inform me of the parts of the egg.  The developing salamander is the embryo.  The fluid in the egg is the Perevitelline Fluid.  The surface of the sphere surrounding the embryo is the Vitelline Membrane and the surrounding substance is called the Jelly Capsule.

This photograph was taken on June 8th, 2015 and one of the few where my flash set-up actually worked.  This shows the stage of development of one of the eggs within the mass.  None of the others were this advanced and this was the only one seen to move around within the capsule.

The gills have formed as have the front legs.  It has spots and the eye looks to be well developed.

The next afternoon I took more photographs but by this time could not get my flash set-up to work.  The resulting photographs are much duller and it was difficult to see well enough to focus on the larvae within the egg even though I used an LED light.

These photographs were taken with the capsules in a square glass vase. 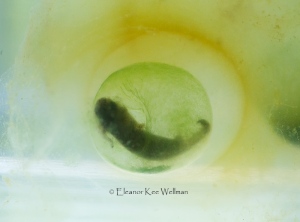 The very next day I got the next two photographs showing the larvae hatching.  The one above shows the wrinkling of the

One minute later this one shows the larvae partly out of the capsule.  In fact I did not see this happening and it was only after when I looked at the images on my computer that I could see the big event.

I can only hope that my images will be more successful next year as it was all very frustrating but rewarding as well.

Next to come will be images of the larvae and my successes and failures photographing them.

The images above were taken on my dining room table in front of a window with my Canon 7D and 7DII, the Canon 180 Macro, a Kenko 36mm extension tube, Manfrotto tripod, two light stands,  Canon 580 and 550 speedlights.

All images in these posts are the sole property of the photographer, Eleanor Kee Wellman, and may not be used for any purpose without my written permission.

One thought on “SPOTTED SALAMANDER EGGS”