A couple of requests for bear, wolf and coyote images prompted, first of all, a trip to the Wolf Centre at Haliburton Forest on Sunday, May 1st. Lots of changes in the pack since I last visited. Haida, a black male, born in 2007, was one year old then and is now the alpha male. The pack has gone from nine adults to four adults. The big news was that on Friday, April 29th four five day-old cubs were discovered. Very exciting for the Wolf Centre as it has been three years with no cubs. That makes them 23 days old now and they expect them to emerge and come down by the windows around the end of June.

That will be one crowded place this summer!

An image posted by a Quebec photographer of two coyote pups on Naturephotographers.Net spurred me to visit a wildlife park in Quebec. The photographer had got his shots at the end of April so I hoped that they would be out and about by now. As it turned out they were behind last year by about four to five weeks. No pups seen the first three days but there was a new den visible from the road. Day four was to be by last day and just after I arrived at my best viewing spot and set everything up the pups started coming up out of the den!

Coyote pups will emerge from their den at three weeks of age and are weaned at six weeks.

The pups came out after the sun hit the den. That was after 1 pm with high, contrasty light and dark shadows, also 65 metres from the road! The direction of traffic meant I had to shoot from the driver’s side out the passenger window.

Adorable little fat balls, barely able to walk. Even though the animals in the park are captive some of the enclosures are quite natural. The coyote enclosure has a high rocky hillside, creek, low, flat area and lots of trees.

There are eight Eastern Coyotes in the enclosure, which is probably too many. There is a hierarchy and one seems to be the outcast. The alpha pair watches the others when the pups are out. One came in for a closer look and there was no fight but did get the message that it was not wanted.

Six is the average number of pups for coyotes to have and it looked like there were that many. It would be super to live closer and be able to watch them as they get bigger. 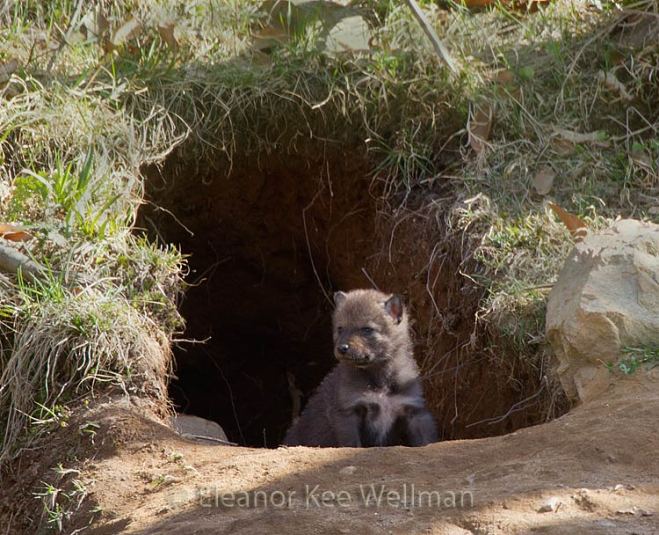 One day two of the bears sparred just like the male polar bears do when they gather at Churchill. They played in one of their ponds and just put on a wonderful show. I felt very lucky to have been able to watch their antics.

This isn’t behaviour you would see in the wild. Black bears are solitary once they have left their mothers. Here there are eight bears in one enclosure. The males have been “fixed”. These two males spent most of their time together and when awake they always seemed to be interactiing.

The captive animals weren’t my only subjects. I discovered a tree being worked on by a Yellow-bellied Sapsucker and saw it excavating a nest hole. A flock of pipits was feeding in the “caribou” fields and an American Bittern was hunting along a wet area as well.

Thousands and thousands of Canada Geese gather along the Ottawa River during migration and the Plaisance National Park is one place to view them. Many flocks woke me up calling at 5:30 am as they flew over the motel.

My bird feeders were empty when I got home and along with too many red squirrels the birds have been slow to return. A Bay-breasted Warbler was a treat to see here on Saturday. The phoebes are nesting and I’ve seen a Red-eyed Vireo around a few time. Rain and cool winds have kept the birds out of sight so far.

All the images incuded in these blogs are the sole property of Eleanor Kee Wellman and may not be used for any reason without written permission. The images were taken with a Canon 7D, with either my 500 f4 IS plus converters or 100-400.

This morning at 7 am I heard sound # 3 of my four spring favourites. As I stepped out my door I hear a Hermit Thrush! I have good Hermit Thrush environment here and sometimes am able to hear three birds singing at once. When they are joined by a Veery and I know spring is really here.

My first sound is when the the Black-capped Chickadees begin doing their two-note call. The second is when I hear a loon calling as it flies over or, even better, when one calls from my lake. The fourth and last I have yet to hear and that is the Whip-poor-will calling out beside the house.

On Easter Monday I made my first excursion out in my kayak. I think it was the nicest, warmest and calmest day we had since early March and haven’t had one like that since. I saw a male Hooded Merganser, Wood Ducks and was thrilled to discover a different Blandings Turtle sunning on a rock. This was a much older turtle than I have seen here before. I saw it from only one side and was unable to tell if it was a male or female. The other individual I have been able to identify was a female with visible markings. This one appeared much older with no visible markings on its caripace.

Blandings Turtles are one of the species we want to protect from disturbance during and after the construction of the snowmobile trail through our properties. They are a Species at Risk. I know the one female has attempted to nest around my house but I have never seen small Blandings Turtles around the lake. They have been known to travel 2.5 km to nest and not before they are twenty-five years old! They may live eighty years and breed for thirty-five of those years. 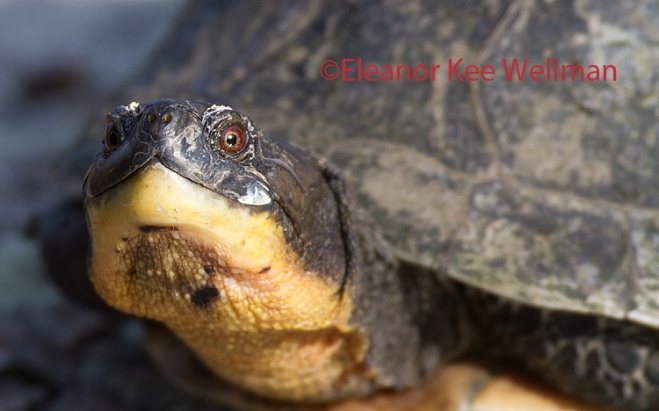 Soon after the juncos started to filter in I noticed one that did not quite fit in with the Dark-eyed Juncos normally seen in this area. It had a definite colour difference between the head/back and the sides. The sides were slightly pinkish brown and this gave in an overall lighter appearance than the others around it.

There was a bit of a discussion taking place on the Muskoka Bird Board with links to various sites and explanations of possible Oregon Junco origins and the suggestion of a “Cassiar” Junco which is a cross between Oregon and Slate-colored which is our normal migrant. After asking for ID and not getting any response I contacted Ron Pittaway and received this answer.

“I find that female juncos with Oregon-like features such as yours are hard to classify. Most males seem a lot easier. Your bird if seen in the west probably would be called a Cassiar Junco. I feel that this name is okay for birds seen in the east because it puts a helpful label on the bird’s appearance for birders and records the occurrence of such forms without strictly designating their taxonomic position. I asked Michel Gosselin of the Canadian Museum of Nature to comment, he said “This bird has obvious ‘western’ features, but I wouldn’t make any pronouncement as to where exactly it came from and what its pedigree is.”

There is still much to learn about Cassiar Juncos and birds such as yours are part of the puzzle.”

Although this bird has not been classified it does make looking over dozens of similar birds more interesting!

I did put out a nice branch for the bird to land on but it insisted on landing on the feeder platform or the deck. Thus no “pretty” pictures.