Soon after I moved to Muskoka in 1992 I met Joan Brown through the Muskoka Field Naturalists. She was an enthusiatic birder, lover of wildflowers, fed Wood Ducks along her lakeshore and grew up and lived on Lake Rosseau. Joan was quite a force of nature herself and voiced her concerns and opinions easily. She was a marvel to me!

She was forced to sell her her beloved place and at that time she divided her special trilliums amongst several MFN friends with the hope that enough would survive and that some would be given back to her for her new garden.

The ones she gave me were planted near my door on Lake Joseph and did very well. When I was building my new place on Porter Lake I dug up the trilliums and transplanted them to a spot where they could be seen from one of my windows.

I planted the trilliums on a Sunday afternoon in the early fall of 2003 along with the bulbs of more than ninety Jack-in-the-Pulpits that had sprung up from a single cone of fruit. The next day was one of the very few that I wasn’t able to be at my new place during its construction and when I did arrive I found that a drainage ditch had been dug and all the earth put on top of my new plantings. It was all carefully removed but a great worry that the trilliums would not live through the trauma.

Success has been varied. One year a White-tailed Deer ate all the blooms and since then they have been protected by tomato cages. They have done very well this year and I am sharing some of my images of them and you will see why they are so special. They have seven layers of petals which gives twenty-one instead of the normal three.

Soon after Joan moved to her new house she was diagnosed with terminal cancer. Her burial service was in the spring and her trilliums were in full bloom. Although I had never picked a trillium before, I had to pick one for her.

Every year when the trilliums bloom I get to give thanks to Joan for choosing me as one of the lucky people to grow them on and remember all the wonderful things she taught me about the flora and fauna of Muskoka. I has taken five years for the Trillium grandiflora to increase to the numbers I planted in 2003.

As I had calendars to deliver to Aspen Valley Wildlife Sanctuary I decided that I would drive Bear Cave Road near Rosseau to see what birds had arrived.

The first bird I saw was this Broad-winged Hawk. It doesn’t always work out that I have everything ready to go before I see a subject and today was one of those days. The hawk did accommodate, though, and after flying down for prey returned to a good perch. 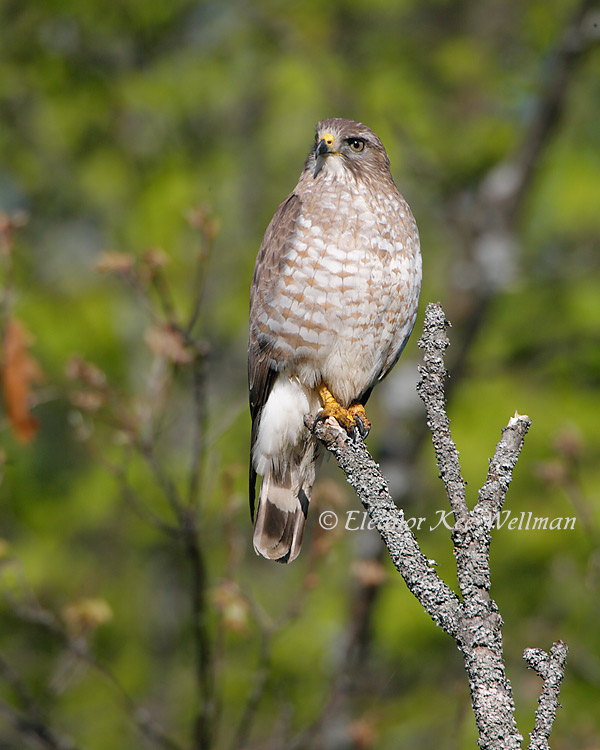 I was hoping to hear a Wood Thrush but heard only a Hermit Thrush. A Magnolia Warbler was singing in its usual territory, as were two Canada Warblers and a third in a location where I haven’t heard one before. There were multiples of Chestnut-sided, Black & White, Black-throated Green, Nashville, Pine, Yellow, Common Yellow-throat, Overnbird and Northern Waterthrush. Only one Black-throated Blue Warbler was heard and that was on my return trip. Lots of Red-eyed Vireos, and a Blue-headed. Eastern Phoebe, Alder, Great-crested and Least Flycatchers. No Olive-sided.

When I got home there was a Scarlet Tanager singing along my road and I got him to come closer to the house for a few unspectacular photos as he was very high in a tree. I have had both male and females around here before.

Late in the afternoon I went out in my kayak with some vegetation I had dug up and planted it on the loon platform. Maybe this will encourage them to use it! I only hope so!

Although not many trilliums grow at my place the ones I saw this morning had faded to pink. The Sheep Laurel is out in full bloom on my lake surrounded by Leatherleaf. Some of it has finished and other plants still have bright bells. The buds of the Pitcher plants are about the size of Hazelnuts in the shell. The Bunchberry is lowing its petals and the Starflowers are blooming sweetly on the shore. 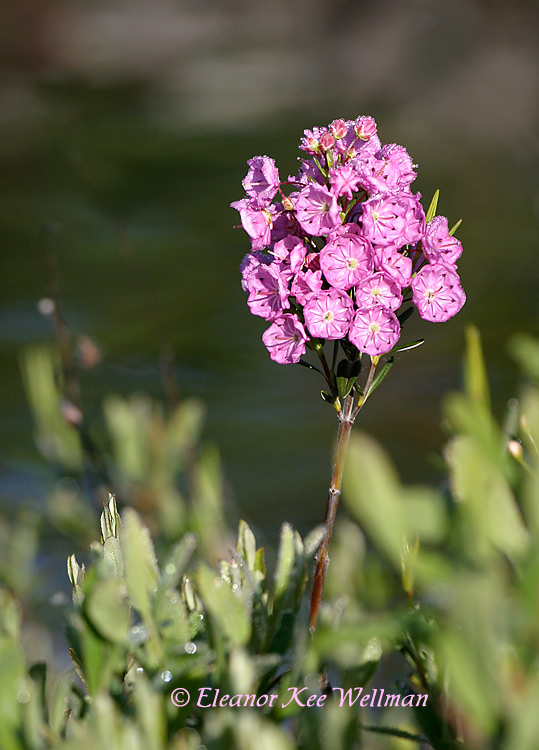 Jack Jennings always says that the Blackflies will be out when the Hobblebush blooms. Right, again!

I had two goals for my second visit to Algonquin Park this spring. One was to photograph a Black-backed Woodpecker that has been reported excavating a nest in a utility pole along Hwy 60. I have now spent five hours observing the pole and have not yet even seen the woodpecker!

My second objective was to photograph the brightness of the emerging leaves against the darkness of the spruce and pines.

On my first spring trip into the park on May 4th my goal was, also, the Black-backed Woodpecker and my camera gear was set up with the bird in mind. Everyone knows that May and June are the best months to see Moose so finding them along the highway shouldn’t have been a surprise. The 500 mm lens on my camera with the addition of a 2 x converter gave me extreme close-ups. I had to scramble to get wider views.

It was interesting to see the various stages of growth of the male’s antlers. The largest were about 8 inches long and the shortest just rounded nubs. Both of the animals that crossed the road in front of me on my second trip had nubby growth. One had much larger antlers and they were different from each other. One was starting to branch into two sections and the other one was was like a rounded bowl. 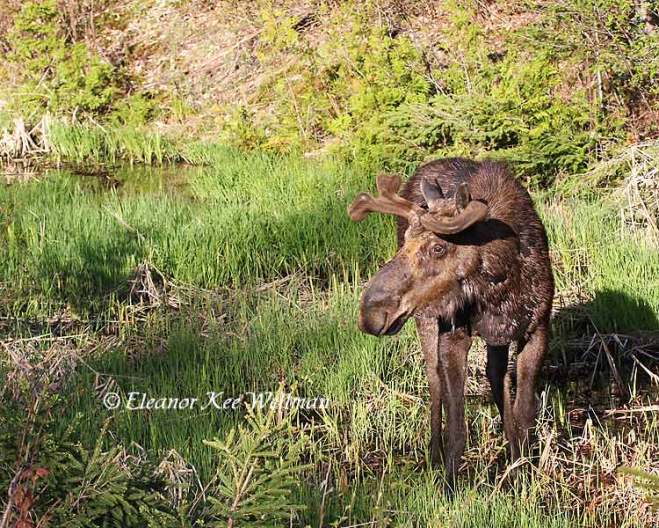 It was a beautiful sunny day and the Blackflies were out in full force. Isn’t spring grand!

Many warbler species have returned and were singing their joyful songs.

This afternoon “A Wing and A Prayer”, Muskoka’s Bird Rehabilitation Centre, is having their first fundraiser of the year. As usual, one of my prints will be part of the silent auction and my 2010 Calendars will be available for sale. All of the profit from the calendars, at this function, is for the birds!

For more information on the calendars please check them out on my website: eleanorkeewellman.com

As spring photography starts, for me, at the beginning of April I am launching this blog with my wanderings from then.

There was snow on the ground but warmer days meant that the edges of the ice on my lake were beginning to thaw.  Otters would be looking for new places to hunt.  Once there are openings around the shoreline vegetation the otters can get in to the water to find fish and frogs.  I snowshoed down with a small blind and my camera gear.  I saw an otter on two days but it didn’t come close enough to photograph, unfortunately!  Otters stay only a few days in one area until the slowest prey has been caught and then they move to a new location.

The otter quest was interupted by my annual visit to spend the week with my grandson,  Ian, in Collingwood for March break.  He goes to freestyle ski camp during the day and I drive around looking for ducks to photograph.  There were lots of displaying Common Goldeneye but none that came in close enough for good portraits.  Lots of environmental shots, however.

When I returned home from Collingwood the ice was out and a couple of days later the first loon arrived.  Then there were two.  Fabulous to hear them calling at any time but spring is the best!

More American Goldfinches arrived at the feeders along with Purple Finches and the Pine Siskins remained.

For the last few years I have gone to Manitoulin Island around the third week of April to try to photograph Sharp-tailed Grouse on a lek at the Gore Bay Airport with Reta and Steve Hall.  The weather wasn’t great so I spent most of my time looking for Sandhill Cranes.  I found a crane on a nest in the same area as a pair nested last year.   Last year the view of the nest was obstructed by much dead vegetation and branches.  Good for the birds but not so good for the photographer. This year the nest was unobstructed and very close to the road.  Good for viewing and photography but not good for the birds!  In fact one of the pair did not relax at all during a 15 minute stop and the other bird relaxed only somewhat.  The dilema – should I plan a return trip to try to photograph the chicks when they hatch?  My decision has been that the birds might take the chicks away from the nest too early if they are stressed by my presence  even though I use my vehicle for a blind.  It isn’t worth taking that chance so I am not planning to go this year.

My birthday arrived and I added another year to the growing numbers.

The daffodils and grape hyacinth bloomed very successfully and after half a day’s work by a few ladies from Northway Gardeners things are back in shape.  The bramble canes have been removed and no longer attempt to keep me from getting to the path to the lake.

I had a comical attempt to use a canoe instead of my kayak on my lake.  I have that figured out and found a good long kayak paddle I can use to save my shoulders.  My good neighbour, Bruno Graeser, has made some alterations to the kayak laucher he built for me last year and and it now works much better for both launching and docking.

It was wonderful to get to Point Pelee and actually see trees in blossom and gardens in full bloom.  Photography was a huge challenge for me this year but I had fun and it is always good to talk with old friends and meet new ones.

I spent a great day with Claude Radley watching him band Pine Siskins and White-crowned Sparrows in his very bird-friendly backyard and then driving down to Windsor to see the Peregrine Falcon pair  nesting under the Ambassador Bridge.

At home the trees are leafing out, the daffodils almost finished, the earth smells wonderful, and the geese have left their nest.   I have had Pine Warblers, Palms, Yellow-rumps, Bay-breasted and an Ovenbird in the trees around the house.  The Pine Siskins have increased to 5 dozen, a male Rose-breasted Grosbeak is visiting, the Ruby-throated Hummingbirds are thirsty and spring is wonderful!